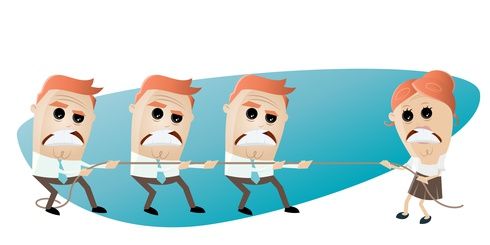 The pitfall of imposed leadership

I was chosen by Heaven.
Say my name when you pray.
To the sky! See Carolus rise.

No man alive or dead commands me, I answer to the Lord!
Hear my orders, question me and die.
What I say was set in Heaven, and so it shall be done!

Anointed by the gods

We have a huge problem with leadership in enterprises. The bigger company is, the more severe problem appears. Quite ironically, it's a problem we barely notice - partially because we've get used to the status quo, but more importantly - because in majority of cases leadership is the fact imposed, not a subject of healthy open market-like (supply VS demand, quality wins) rules (this is what traditional, pyramid-alike hierarchical management is about).

Sounds familiar? Just try to give it a bit of consideration & answer these questions:

And it works the same the other way around as well:

I believe by now it should be clear what all of this is going:

... these puzzle pieces were not meant to fit

Random person is paired with bunch of random people. With a very limited chance to gain trust (both ways!) & align properly - due to people playing safe & preferring ass-covering over transparency. The more traditional management model, the worse as the leader tends to become a single point of contact with higher level management & even key stakeholders - it actually makes him pretty much immovable for subordinates and seals her/his position in the pecking order: for the sake of external communication, (s)he can shape any kind of message that fits her/him. And team may not event suspect that.

Leader himself may end up just as screwed or even more - if his actual power (within the organization) is limited, (s)he may have only a virtual impact on team. Stubborn (& mutinous) team may wreck any efforts (check this post) in such a way that you won't be able to find anyone guilty without a thorough investigation. Sometimes it's not even a single bit of a bad will on the team's side: leader lacks charisma, experience & fails to inspire / credentialize her/himself in his role. It would be completely unreasonable to expect team to follow a person they lack belief in.

Fortunately (?), the whole thing is mainly on people - and it means that if reasonable & pragmatic people may be able to work out a healthy foundation for mutually beneficial cooperation. People who are patient, willing to listen (not just hear) & sometimes sacrifice (or at least adjust) their ambitions to fit the interest of whole group altogether. DevDay 2015 & my evolving perspective on conferences