Database design: what they haven't taught me in schools

TL;DR Practical usage of database technologies has drifted quite far from academical theory we've (or at least I've) been taught at universities. In my case some lessons learned were pretty much contrary to opposite to what I've believes was correct as a fresh graduate. This blog post is about them - e.g. why redundancy may be advantageous, deleting any data is wrong or updates in place should be replaced with aggregate switching.

I'm one of these people who've built their professional career in software engineering on prior academic knowledge gained during studies on technical university. I'm proud of if, I think my studies have helped me a lot & if I had a chance to change my education path in the past (knowing how it all went), I would not change anything. But to be honest the measure of how closely theoretical knowledge corresponds to everyday practice varies from topic to topic - surprisingly one of the topics with quite a wide gap between the theory & practice is database design, especially for on-line (more or less) transactional systems (the ones I've spend majority of my career building).

Why do I refer to that? Every once in a while I share my experience with some more junior engineers & sometimes they seem a bit shocked with a full certainty - why not make it a blog post then?

That's why I hereby present you my set of key, baseline rules I've worked out (/ learned from someone, adopted/adapted) during all past years. Adhering to them (in an aware, thoughtful way, of course) is for me sort the first step to provide a certain level of quality in a system-under-development.

Few basic disclaimers before we start:

OK, let's get to business then:

Once you design a data structure (e.g. table), apart from assigning it to a specific aggregate, always mark it (e.g. in metadata) as particular category of information, e.g.:

Why do that? There are at least two reasons:

Don't delete any data (almost ever)

My (teams') code almost never deletes any data. If something has appeared in DB structures, it should (physically) remain there for historical traceability & transparency reasons. Of course it doesn't mean that end-users / service consumers should keep seeing it -> having a common convention (bit field named "MarkedAsDeleted") to filter them out works like charm here.

Of course there may be delete-heavy situations where data is highly volatile & past values are not important after certain (short) time (not every quantum of information is business-critical), but otherwise than then, this rule is explicitly applicable in vast majority of cases.

There's also a case of law obligations (data removal requests allowed by law) - but this is completely separate story (& can be handled in a different ways).

For transactional data, don't update either

Proper versioning is the key.

In fact, in-place updates are usually just as bad as deletes - especially for "transactional data" (check the definition in categories above). What usually worked for me best was having a sensible versioning schema on the level of aggregate & switching over between full, internally coherent aggregate versions.

Reasons for avoiding updates are pretty much the same as for deletes - they decrease traceability, transparency, may cause to accidentally losing data (yes, I've heard about backups ;), but re-building broken parts of DB from backups after some time IS cumbersome). Such approach also helps a lot with complex, multi-step modifications ("in progress", not effective yet versions) & their saga-based implementations.

If you design this mechanism well, adding archiving / history rolling on the top of it will be a piece of cake.

... as long as you contain writes in aggregate-level services.

We all seem so tainted with the overzealous tendency of unconditional normalization (mainly due to traditional academic education) that we keep omitting the fact that there's actually nothing wrong with reasonable redundancy of data. What does it mean 'reasonable' (in this particular context)?

This is especially beneficial in (quite common) scenario of apps that serve far more read requests (queries) than write requests (commands).

But isn't it confusing for the other developers in the organisation? How should they know which field to use, if it's duplicated in more than 1 entity? In fact - other developers from other teams should not really care - database schema is just an implementation detail, teams other than the "owners" of the bounded context should use only the abstract public interface on the service level to access the data they need.

...all the way down through entities.

My preferred strategy for treating IDs is a mixture of two points from the list above - the ones about immutability & redundancy:

Yes, identifiers also take some space, but this is a price I'm very wiling to pay (without further thought) for overall simplification & pretty much guaranteed high query performance.

Contrary to our intuition, DBs are always in motion (as the code is) - structures are the subject of changes (preferably in sync with code that uses them), accompanied by various migrations & data conversions, sometimes there are also needs for ad-hoc modifications (data fixes, rare operations that are not covered in GUIs) - letting any of these to be manually applied (e.g. as SQL scripts sent via mail), out of strict automation & control means that you're pretty much giving up on real, working Continuous Integration loop (due to lack of explicit ordering, repeatability & determinism).

In fact it may look like I'm convincing you to treat DB changes just like changes in code, but reality is a bit more complex:


Frustrations of a Software Architect 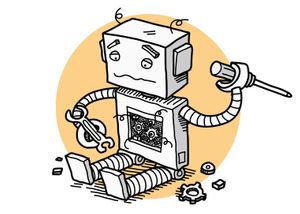