February is over, so it was a high time to open the conference season in 2015 already ;P Due to practical reasons I carefully track such events that happen in Poland (not much to be tracked, but the number is increasing from year to year) - that's how I found myself in Cracow on 26th of February, the 1st day of Lambda Days, relatively less known conference dedicated to functional programming. You can find all the details about the idea of this conference on its website, but there's one thing worth mentioning -> during the second day of Lambda Days there was a very interesting full track (or rather - 2 parallel tracks) of sessions about reactive programming. This "event within an event" was called ReactDay.

But let's get back to the conference itself.

Pardon the personal inclusions, but I can't ignore the fact that Lambda Days took their place on AGH (University of Science & Technology) - my Alma Mater. What is more, the event was hosted by The Faculty of Computer Science - of which I am a (very proud) graduate. Getting back there after 12 years (I left Cracow just after graduation) & seeing how things are doing (truly impressive!) was a great experience itself.

Back about the venue itself: top-notch facilities in a completely new building (that didn't even exist "in my times"), plenty of space, convenient location (15 mins walk from the Main Square) - almost perfect (even keeping in mind that academic year is in progress & we were in the middle of living campus :>). What's to get improved in 2016?

I didn't have high expectations initially, but once the list of announced speakers started to grow, I've changed my mind:

Absolutely honestly, I don't think there was even one truly weak session I was on - either I was lucky or the quality level was that high. I didn't switch rooms even once. The difference between both days of the conference was that on the 1st day I didn't have much issues with picking a session in each timeslot (I always have a 1 clear favourite of 3 tracks), but on the 2nd day there were few timeslots when I wanted to be on 2-3 sessions in the same time.

What's important as well is that all the speakers were absolutely approachable after the talks - I think that during such conversations I've learned even more than on the actual sessions.

Does it mean that all sessions were perfect & I have no complains at all? No, not at all, but these are really minor issues, that didn't kill the show at all:

I had a great time. Both at the conference & in Cracow. If you want to have a peek into the atmosphere of the event, I'll just give you one example:

Friday morning: Kinga Panasewicz (neuroscientist) is presenting a keynote about computers' impact on our brains (yeah, off-topic, but quite an interesting one). She's astonished with the number of questions & level of interaction with the audience, but time is running out, so she admits that she may have to skip some content, because the coffee break is approaching. She gets a very clear answer - a person from the crowd shouting:

"Don't worry, we'll rather skip the break, go on."

and the storm of applause as an incentive :) 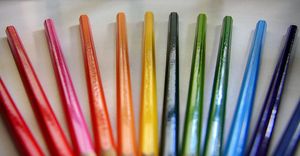 
The renaissance of renting (AKA pay-per-use these days)