1.) My favourite dev tool creators - JetBrains - have announced the feature set of forthcoming, new version of ReSharper (7). You can find it here: http://blogs.jetbrains.com/dotnet/2012/07/resharper-7-whats-inside/. To be honest, no breakthrough detected (but none expected anyway). Things worth being noticed are:

2.) We’ve positively evaluated the automated deployment tool for .NET applications - Octopus (http://octopusdeploy.com/) and we’re using it on our project officially. Plenty of goods inside, you can expect some wider description coming (as a separate blog entry). Tool is very cheap - unlimited enterprise license is 800 bucks only. Ah, and it integrated very smoothly with TeamCity - what could we ask more for?
3.) I’ve decided to go for PSM II (Professional Scrum Master II). I haven’t register yet, but I plan to do it within a week, so hopefully I’ll go for the assessment before my daughter’s born (which is expected in two weeks). Keep fingers crossed, that ain’t gonna be easy (I mean assessment, hopefully the birth will be without any issues).
4.) In the meantime I’m giving more and more attention to one of the most trendiest topics of this year - Kanban (http://en.wikipedia.org/wiki/Kanban). Kanban has been adopted (quite recently) in software development and it’s getting more and more positive feedback. Some even tend to say that "Kanban is a new Scrum" (http://www.infoq.com/news/2012/07/is-kanban-the-new-scrum). My interest in Kanban raised when I learned that one of my college pals - Paweł Brodziński (@pawelbrodzinski) is a Kanban Agilista. So far, I’m a bit skeptical, but I can’t deny that there’s something useful in all the Kanban stuff. If you want to learn a bit about Kanban, go for one of these sources:
5.) Interesting article about Borland (You don’t know what’s Borland? Shame on you!): http://www.quora.com/Borland-company/Why-did-Borland-fail/answer/Danny-Thorpe
Share this post
The link has been copied! 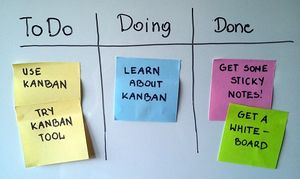 
Kanban - what's the hype about?